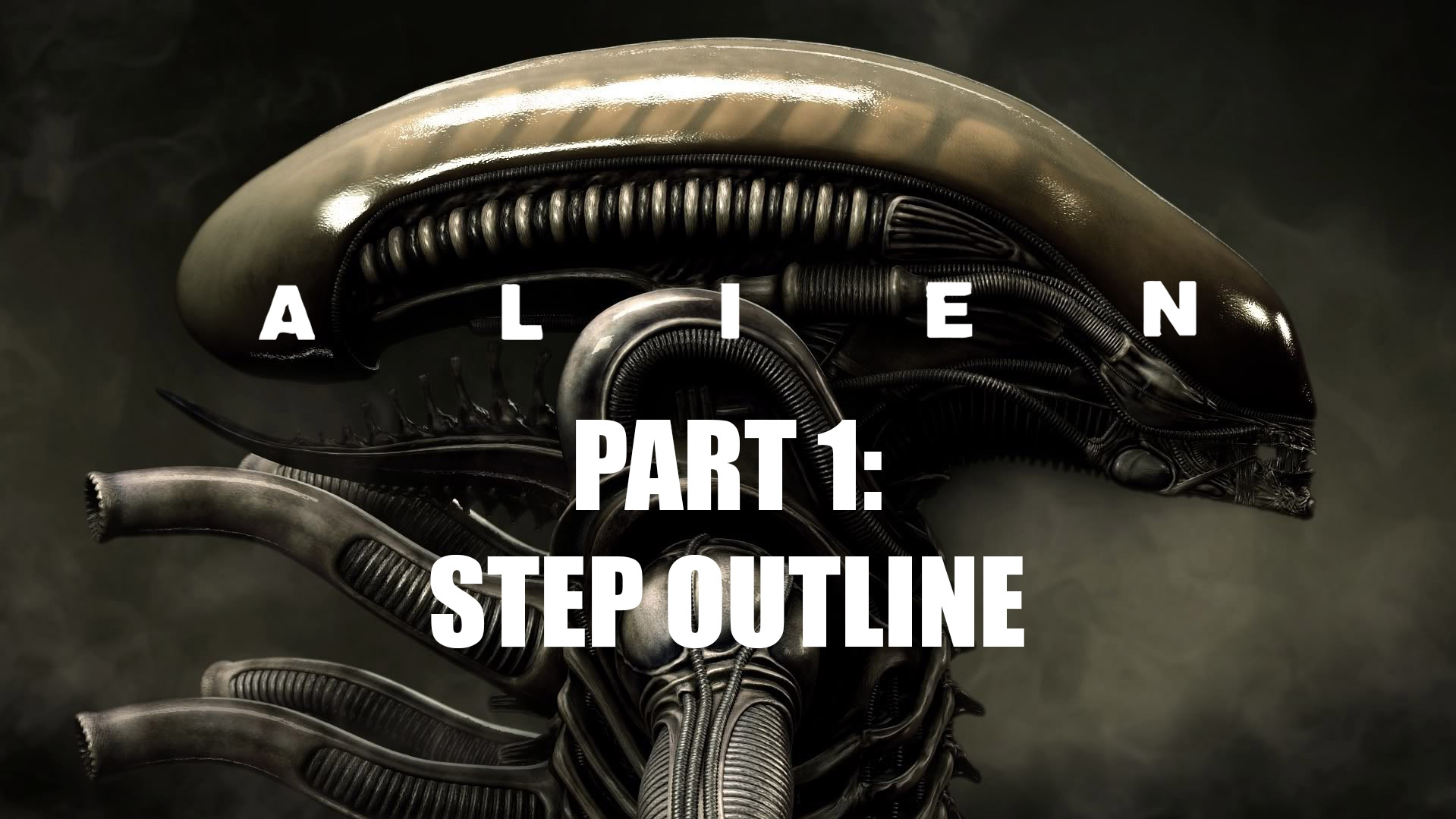 Space, in the distant future. Commercial spaceship “Nostromo,” owned and operated by “The Company,” is returning to Earth, after a business journey. The computer system (called “Mother”) wakes up the crew from suspended animation.

During breakfast, mechanics Brett and Parker bring forth a request for a bonus payment. Dallas, the ship’s captain dismisses their claim, telling them that they will get what they have been contracted for. “Mother” calls Dallas for a confidential briefing.

Ash, Ripley, Kane, and Lambert realise that they have strayed off course and Earth is nowhere in sight. They try to contact Earth’s traffic control centre.

Brett and Parker argue about their reduced salary, as they walk inside the belly of the ship’s machinery, going towards the crew meeting.

Film’s catalyst: Dallas announces that Mother has stopped their return to Earth, in order to investigate an SOS transmission. Parker complains, bringing up the bonus subject again, but Ash says they are obliged to investigate, according to their contract; otherwise, they will receive no payment at all. The crew agrees to get on with the orders.

Lambert analyses the signal; it doesn’t sound like anything they have heard before. They locate its source on a planetoid.

Nostromo approaches the planetoid, disengaging and sending a small raft towards it. They land with a bump, which causes minor damage to the raft. Parker and Brett say that they have to do about 25 hours of repairs. They nag, hearing that Ripley is coming down to check on them.

Dallas and the others debate walking to the signal’s source. Ash analyses the atmosphere. They form a team and decide to walk.

Dallas, Kane, and Lambert wear their spacesuits and walk on the planetoid’s surface, while Ash observes from the control room.

Brett and Parker pester Ripley about the payment again; she tells them to fuck off.

Dallas and the others approach, as Ripley sits in front of Mother.

The team discovers an extraterrestrial spaceship wreck. Inside it, they find a gigantic alien corpse, fossilised on its ship’s cockpit. Something has burst out of its chest. Kane discovers a hole in the floor and calls the others.

Ripley tells Ash that Mother has deciphered part of the signal; it has turned out to be not an SOS, but a warning. She tells Ash that she wants to follow the team, but Ash discourages her.

Kane gets into a huge cavernous vault full of alien eggs. One of them opens, and a crab-like organism hurls itself out of it and sticks onto Kane’s mask.

Dallas and Lambert bring Kane back to the raft. When Ripley hears about Kane’s parasite she refuses access to Dallas’s team, suggesting quarantine. Without Ripley’s permission, Ash opens the hatch, letting everyone in and starting a rivalry between Ripley and himself.

Ash and Dallas cut through Kane’s mask. They see that the organism has eaten into the mask and attached itself onto Kane’s face.

Lambert slaps Ripley on the face, for refusing letting them in. The mechanics separate the two women. Dallas reprimands Ripley for disobeying his orders, “even if they are against the law.” Parker takes Ripley’s side.

When Ash grabs one of its legs with a pair of pincers, the organism wraps its tail tighter around Kane’s neck. Ash stops and performs a scan of Kane’s body. The organism seems to be feeding Kane oxygen. Dallas wants to get it off, but Ash says that this may kill Kane. Dallas, however, orders him to cut the organism and release Kane.

They do a little cut on one off the organism’s legs, making it bleed acid! The liquid eats through two or three of the floors below.

Parker and Brett continue struggling with repairing the engine.

Ripley reprimands Ash for letting the organism on the ship. “When Dallas and Kane are off the ship, I’m senior officer,” she says. Ash defends his decision and asks Ripley not to get involved with his scientific job.

Ash calls Dallas into the infirmary. The organism has detached itself from Kane’s face. Ripley, Ash, and Dallas look for the organism around the room. It drops on Ripley, but it’s dead.

Ash, Ripley, and Dallas examine the dead organism. Ripley wants them to ditch it, but Ash wants to take it to Earth for tests. Dallas leaves the decision to Ash, infuriating Ripley.

Ripley complains to Dallas for letting Ash decide. “This is what the Company wants,” says Dallas, washing his hands. Ripley reports that the repairs are almost over; Dallas orders take-off.

Take-off sequence. The shuttle leaves the planetoid, heading back to the main spaceship.

Parker insists on freezing Kane and Brett agrees. Ripley makes fun of Brett for always agreeing with his supervisor, like a parrot. Dallas decides that Kane must go into quarantine. Lambert tells the crew that they are 10 months away from Earth. Ash calls them to see Kane.

The spirits get higher, as the crew finds out that Kane has recovered, having only the memory of a horrible dream about smothering.

As the crew has a meal, Kane’s chest bursts and a tiny alien breaks out of it. Ash urges them not to touch it, as the little monster (“Kane’s son!”) escapes. Kane dies.

An aftermath scene: Kane’s funeral. They cast his body from the airlock out to space and continue their journey.

Brett has prepared and demonstrates an electric weapon, while Ash offers a motion detector of his. Dallas orders the team to lead the organism into Parker’s net and send it straight in the airlock.

Ripley, Parker, and Brett look for the creature. Ripley’s motion detector shows something. They think they get it cornered, but it is only Jones, the spaceship’s cat, which runs away in panic. They send Brett to catch the cat, so that it doesn’t affect the motion detector again.

As Brett searches for the cat, he discovers what looks like a rejected layer of alien snake-skin. Following the cat, he comes across the alien organism, which has grown into an enormous size. The alien kills Brett. Ripley and Parker hear his cry and follow, finding only his blood.

Ripley and Parker report to the others that the creature that has killed Brett uses the air shafts to move around the ship. Ash proposes to try to burn it until it retreats to the airlock. Dallas will go himself, while the others cover him.

They proceed with this plan. Dallas crawls in an air shaft, holding his flame thrower. Lambert warns Dallas that she has just spotted a movement on the motion detector. As Dallas goes lower, Lambert loses the creature’s signal on the detector, while Dallas finds some of the creature’s slimy saliva. Then, the second signal reappears, moving towards Dallas’s. The alien gets him.

The four left discuss what to do. Ripley, being in charge, proposes to proceed with Dallas’s plan. Lambert disagrees and proposes to abandon the ship, but Ripley tells her that the shuttle doesn’t take four persons.

As Parker goes to refuel the flame thrower. Ripley asks Ash about Mother. She tells him that since she now has access to Mother, she doesn’t need his useless interference.

They plug Ash’s remains and ask him how to kill the alien. He tells them that they simply can’t kill such a perfect organism. Sequence’s catalyst: Ripley decides to blow up the ship and escape with the shuttle, along with Lambert and Parker. These revelations clarify every mystery about Ash’s conflict with Ripley, resolving their hate subplot with a grinning “You have my sympathy.”

Ripley discovers Dallas’s and Brett’s bodies trapped in a cocoon complex. Dallas is still alive, pleading for his death. Ripley burns both men with the flame thrower.

On her way to the shuttle, Ripley confronts the Alien and runs back inside the main spaceship.

Ripley tries to override the self-destruction mechanism. Even though she manages to reverse the process within the time limit, Mother doesn’t stop the countdown. “Bitch!” shouts Ripley.

Ripley carefully makes her way towards the shuttle again. She manages to arrive there safely, pick up the cat’s cage, and lock herself inside the shuttle. The alien is nowhere to be seen.

She rockets away as Nostromo blows up.

Ripley gets ready to sleep, but the Alien is in the shuttle, hiding among the controls. Rippley slips into a space uniform and forces the Alien to expose itself by turning on the coolant tanks. When it does, Ripley opens the shuttle’s airlock, casting the alien out.

Ripley records the final report of the Nostromo before getting herself into suspended animation, again.